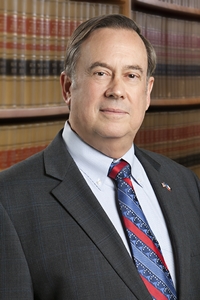 An accomplished civil trial lawyer in the defense and prosecution of real estate-related disputes, as well as a board certified commercial real estate lawyer with significant experience in residential, commercial, water, governmental unit, and oil and gas rights disputes, equally capable with commercial and residential transactional real estate legal needs, John averages three to four hundred real estate transactions in any given year. He is beloved by those he counsels with and those he regularly teaches and trains. Treated with the greatest respect and/or trepidation by all those who face him in a court of law or on the other side of counsel table, John G. Lione is well known to many in every sector of the Texas real estate industry.

John attended Wheelus Air Force Base High School in Tripoli, Libya from 1963-1967, whose mascot was the fighting uaddans. He was unable to officially graduate high school, being evacuated from Tripoli by paratrooper plane when the Arab-Israeli War of 1967 broke out.

An Honors graduate from Georgetown University in Washington D.C. in 1971, and from University of Texas Law School in 1974, John joined the City of Houston City Attorney’s office in its real estate section in 1974 at a time of explosive growth for the Houston area. A few short years later, already well-schooled in every exotic form of real estate dispute which could arise in the largest city in the world in which there were no zoning laws, John was offered the newly created position of In House General Counsel to what was then a relatively small regional real estate company, known today as Coldwell Banker Real Estate. What Houston didn’t prepare John for, performing in house counsel duties for Coldwell Banker certainly did!

When an opportunity too good to say “No” to, presented itself in Austin, in 1983, John, his supportive wife, Wendy, and their two children moved to Austin, Texas. In 1984, John was certified in Commercial Real Estate Law by the Texas Board of Legal Specialization, a certification he has held for 34 years. In 1985, John began a private law practice which, in time, became Lione & Lee, P.C., a very successful practice in which John was able to concentrate entirely in the practice of real estate law in every area from complex commercial closings in State District Courts to landlord-tenant disputes in rural Justice of the Peace Courts, appearing on behalf of clients in every part of Texas. John’s life is a fascinating road-map of the growth and challenges of land acquisition and development in every part of Texas. John has been certified with the Texas Board of Legal Specialization in Commercial Real Estate Law since 1984.

Whether great or small, John welcomes and delights in even the smallest of these legal matters. It is this hallmark of his practice, his Spirit as good-humored, yet, when warranted by the circumstances, ferocious civil trial lawyer, that makes John beloved by all.

When John is not busy being good humored and/or ferocious in the practice of real estate law, he is devoted to his wife of 40 years, Wendy Ann Lione, his two children Ryan, a fellow Fowler Law Firm attorney, and Kacey, an escrow officer, and his adorable grandson, Lucas, who are truly the joys of his life. 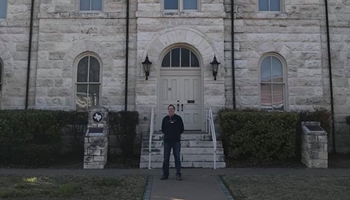 John in front of the Historic Somervell County Courthouse 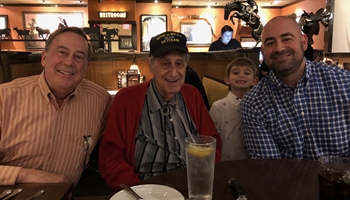