A “naturalized” Texan raised in Spring, Texas and a proud graduate of University of Texas Law School, David Oliver devoted his first 13 years as a licensed Texas attorney to active duty service in the United States Marine Corps. Highlighting a distinguished military career, he earned a Masters in Military Law, and served with distinction as a military judge. Particularly noteworthy is the fact that while serving as a military judge, David deployed to Iraq and presided over numerous military courts-martial in improvised courtrooms throughout the combat theater.

In 2009, as a decorated U.S. Marine Corps Lieutenant Colonel, David elected to leave government service to pursue a dream, to return to Texas and the practice of law. For the past six years, David has devoted himself to a successful private law practice, serving the legal needs of both institutions and individuals with highly successful results.

Continuing his commitment to leadership and public service, David is active in a variety of community- and church-related service projects. He actively serves at First Baptist Church Georgetown where he and his family are members. He currently serves as the President of the Williamson County Bar Association and the Secretary of the Board of Directors, Georgetown Chamber of Commerce.

David is also a devoted husband, married for a quarter-century to the great love of his life, Mary Beth Oliver, and is the very proud father of two adult daughters. 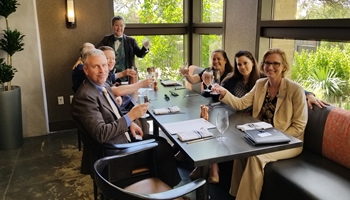 Lunching with our friends Ellen Skoviera and Danny Snyder of the Williamson County Symphony Orchestra to discuss sponsorship and outreach opportunities with the orchestra. 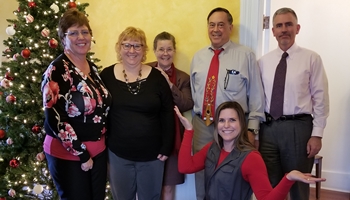